From Yahoo! Sports, by Doug Farrar: 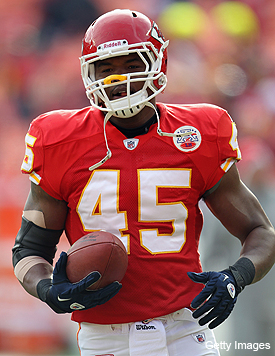 When Kansas City Chiefs tight end Leonard Pope (notes)recently went back home to Georgia, he probably didn't expect that he'd be talked about as a hero, but that's just what's happening after he saved six-year-old Bryson Moore from drowning while he was at a pool party last weekend. Bryson's mother Anne, who has known Pope since the two were children, told the Amercius Times-Reporter what happened.

"Bryson was in the water with the other kids. All of a sudden, I saw Bryson going down in the water and I started screaming. Leonard was inside, and he came out of nowhere and dove into the water without any hesitation, cell phone in his pocket and all. He saved my son's life, and I am so thankful that he was there for me and my child." The boy is said to be understandably afraid of the water after the incident, but okay otherwise.

Apparently, Pope was the only adult at the scene who knew how to swim, which — let's go ahead and say it — speaks to some less-than-stellar planning when it comes to a pool party.

And as Mrs. Moore pointed out in the paper, it's possible that the lockout saved her son's life. "The fact that he is normally at camp and could have been in Kansas City just proved to me that he was placed here to save my son from drowning … I thank God that he was here. He truly lived up to his nickname "Champ" because he was truly a champion for me and my son this past weekend."

"I didn't think twice about it," Pope said on the NFL Network's Total Access show on Monday. "You know when you hear that motherly voice, and it's something serious when they're screaming. She was like, 'He's drowning!' and I didn't drop anything — I just dove into the water. I brought him back up and handed him to his mom. Patted him on the back and he coughed a couple of times, but he was pretty good for the rest of the day."

Pope said that Bryson probably lost his footing and wound up in the deep end of the pool by accident, and that he didn't see Bryson's head above the water; just the young boy's hands were visible.

Pope was then joined on the show by Mrs. Moore via phone, and she voiced her gratitude without reservation. It was a great moment.

Marcus Johnson(notes), Marketing & PR Director at Phoebe Sumter Medical Center in Americus, told the paper he wasn't surprised that Pope went to save Bryson without hesitation. "He is always doing things for the community, and he truly loves the kids and they love him. He is truly a hometown hero and this is just another reason for us to be proud."

Pope, who played in Super Bowl XLIII with the Arizona Cardinals, caught 10 passes for 76 yards and two touchdowns for Kansas City in 2010. The five-year veteran is a free agent under 2010 league rules.

Comment by Naji on June 24, 2011 at 4:01pm
I'm glad Mr. Pope was there to save this young man, but what needs to happen more than ever is for this mother and the other parents to get their kids into a swim program to prevent this from occurring again.

Comment by Angela Gray on June 16, 2011 at 9:14pm
It's fortunate that Pope can swim! I agree, it doesn't make sense to plan a swimming party with no swimmers in attendance!  It's good to hear a happy ending in a drowning story.