From NYTimes.com, By KAREN CROUSE 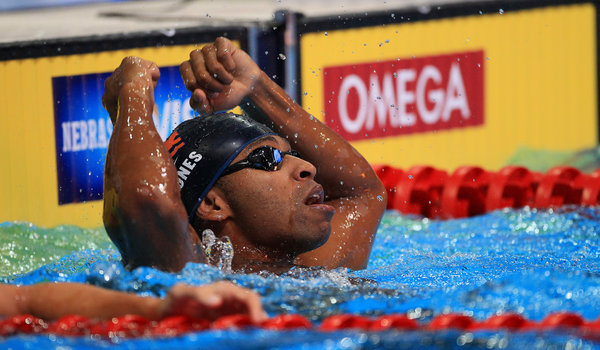 Cullen Jones after winning the 100-meter freestyle final Sunday to qualify for his second individual event at the Olympics.More Photos »

OMAHA — Swimming in the United States has never appeared more diverse, but not everybody in the sport’s fan base is out in front of this trend. Marcus Jordan, a basketball player at the University of Central Florida and one of Michael Jordan’s sons, was in a hotel lobby on Saturday night, having traveled here for the United States Olympic trials to cheer for a high school friend, Conor Dwyer, and Dwyer’s training partner, Ryan Lochte.

“Four people came up to me and asked me for my autograph,” Jordan said. “They thought I was Cullen Jones.”

Sunday night, the real Cullen Jones stood up. He qualified for his second individual event in the London Games with a victory in the 50-meter freestyle. Jones, 28, was timed in 21.59, to finish one-hundredth of a second ahead of Anthony Ervin, who shared the gold medal with Gary Hall Jr. at the 2000 Olympics, retired in 2003 and resumed training last year.

With his runner-up finish, Ervin, whose father is of African-American and American Indian descent, became the third black member of the 2012 United States Olympic team: Lia Neal, a 17-year-old from Brooklyn, finished fourth in the 100-meter freestyle on Saturday night to earn a spot on the women’s 400 freestyle relay. The United States has never had more than a single team member of African-American descent and never had a single one before Ervin in 2000.

“It’s amazing,” said Jones, who is the face of United States Swimming’s Make a Splash program, intended to teach children water safety. “Three swimmers with African-American roots on a U.S. Olympic team is far beyond what I could have ever imagined.”

Jones, of Irvington, N.J., has taken a fraternal interest in Neal, who has three older brothers. “We’ve spoken on several accounts,” she said. “All I can remember is what he said before the 100 free. It was really helpful.”

Neal was so excited to make her first Olympic team at her second trials that she did not sleep much Saturday night, and it showed during the Sunday morning preliminaries of the 50 freestyle. She was one of the last off the blocks in her heat of the 50 freestyle and was timed in 25.67 seconds.

After warming down, Neal, a rising senior at Convent of the Sacred Heart school in Manhattan, met with a small group of reporters and fiddled with the ties of her gray hoodie as she fielded questions.

“I really don’t know how people with multiple events do it, like Michael Phelps and Ryan Lochte and Missy Franklin,” she said, naming three of her London teammates. “I’m completely exhausted today.”

Neal punctuated many of her answers with nervous giggles. The loudest thing about her was her lime green high tops. Because Neal does little to draw attention to herself, it was easy to overlook the import of her 100 freestyle swim.

She became the second female swimmer of African-American descent to make an American Olympic team. The first was Maritza Correia, who was a member of the silver-medal-winning 400-meter freestyle relay team at the 2004 Athens Games.

“It’s a pretty big title to have,” she said, adding, “I just hope this inspires more people to join the sport.”

One of the swimmers who inspired her, she said, was Correia. Neal, who learned to swim in the first grade when she followed her friends into the pool for lessons, laughed as she spoke of becoming Correia’s Facebook friend a few years ago “and she didn’t even know me then.” After Neal made the Olympic team, she said she heard from Correia.

“It was a pretty heartfelt message,” Neal said, adding, “She said something along the lines of congratulations and enjoy every moment and just to soak it in.”

Neal knows she is a role model because she hears it from the children on her team daily.

“I’m very flattered,” she said. “Swimming is becoming more and more diverse in the sport. The Make a Splash Foundation, they’re trying to get minorities in the water and be water safe, and I think that’s really great. With me being in New York, I guess it’s a predominantly white sport, but you still see a lot of Chinese people and Hispanics, especially my team. We’re so diverse.”

“It’s so cool,” he said. “Anytime there’s a breakthrough of any sort like this, it’s great for everything. It’s great for society. It’s great for our sport. It just shows that we’re branching out and people do get a chance no matter where they’re from — they’ll have a chance if that’s what they want.”

In 2000, USA Swimming officials heralded Ervin’s multiracial background, which he found discomfiting. In Sydney, Ervin said, “I’ve always been proud of my heritage.” He added, “But I don’t think of myself as the first of this or the first of that.”

Jones laughed when he heard that Jordan had been confused for him. “That means my face hasn’t been out there enough,” he said. “First place tonight should help.”

This is so exciting! I can't wait to watch them in the Olympics.