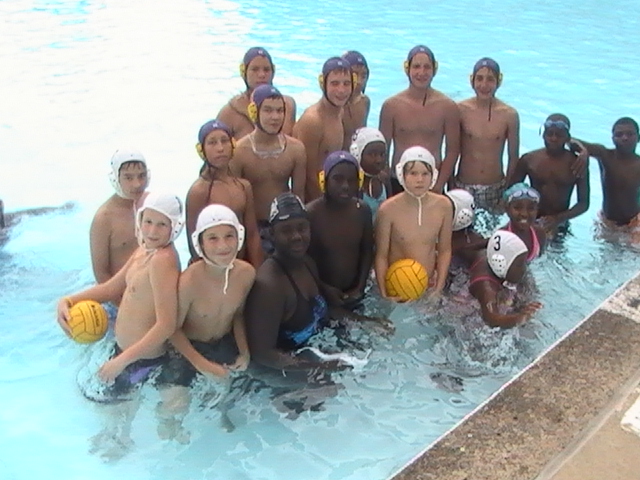 We had a great first week of water polo playing in the central part of Pittsburgh. We got Citiparks to let us try a new program at a low-use pool in The Hill District part of town, next to the Ammon Rec Center, 2216 Bedford Ave.

Here we are gathered, a bit, after the second day.

I just got back from Atlanta, GA and what a wonderful weekend!

I had the opportunity to attend the Urban Classic Invitational hosted by the City of Atlanta Dolphins swim team. The long course invite (formerly known as the Chris Silva African American National Championships) was a bit of reunion for me as I got to see one of my old college team mates coaching and working with some up and coming swimmers from the metro Atlanta area. I enjoyed watching the meet and speaking with parents… Continue

This is exciting news, and also energizing! This is a challenge donation; we have to raise the OTHER $50,000 in the next 6 weeks, in time for a Labor Day screening.

I am confident about this, especially since friends and colleagues across the country are stepping… Continue

As a we get closer to the first day of summer, my blog spot will be place for insight and thoughts about Diversity in Collegiate Swimming. I hope you enjoy!

This Saturday Monica Gonzales will dive into the cold waters of the Hudson River in NYC to raise funds and educate people about the great work Swim Strong does in saving and changing children's lives.

Her daughter is her inspiration.

You can get behind her by donating through http://www.nycswims.org

Will I see you… Continue

Free Swim, a documentary film about the paradox of islanders not knowing how to swim featuring Swim to Empower, has been selected as a finalist at the Blue Ocean Film Festival!

If you are in the Savannah, GA area from June 10 – 14th, join us for Free Swim’s World Premiere.

Try to catch one of our upcoming screenings:

Check out www.freeswimmovie.com to learn more ....

From NYTIMES:" Swimming Without a Suit"

Pittsburgh has a city swim meet in August at Highland Park Pool. Here is a squad from the South… Continue

Gotta get back in the water!

Haven't been in pool all week. Will head out tomorrow!

Errol, I'm not sure I know Lisa Webb in Atlanta. Our swim team (HCAP) has attended a swim meet in Atlanta for many years. It was named the Chris Silva Invitational National Black Championship Meet. I…

Errol,
I'm not sure I know Lisa Webb in Atlanta. Our swim team (HCAP) has attended a swim meet in Atlanta for many years. It was named the Chris Silva Invitational National Black Championship Meet. It is good to hear from you and I look forward to seeing you during homecoming.
Thurman (T-Bird) Continue

Ric Powell's aquatic career began at a young age. In the video he discusses his competitive swimming career and his time in the Navy.

Program's goal is to knock down barriers, expose black youth to swimming

A great article that was in the ASCA monthly newsletter
http://www.commercialappeal.com/news/2009/mar/19/program-makes-a-splash/?partner=RSS

My daughter Alyssa, who created Fins for Swims, is an active swimmer at SwimMAC Carolina. They are doing a fundraiser to support operations.

SwimMAC swimmers are active in the local community, The Joshua Project and other community service projects.

I thank you and Alyssa thanks all those who support her and SwimMAC Carolinas.

Lee discusses how he went from the national to international stage with his swimming lessons and the barriers he had to overcome to be successful.

In the next installment of the Lee Pitts' interview, Lee talks about appearing on CBS Good Morning, the doors swimming can open, and most importantly that 'Swimming is Fun!' for everyone.

Lee tells how he went from taking lessons to becoming an instructor earning the title "Swimguy" from everyone who saw him in town. Lee's story is a remarkable one, so make sure you listen to part 2 on the… Continue

Over the summer, Shaun spent time with and interviewed some members of the Diversity in Aquatics Program (DAP). We want to take the time to share with you some of the clips of those interviews in a new section of our site called, "Featured Members."

We will begin with Lee Pitts. Lee tells the story of "17… Continue

For additional information or updated information about these programs contact the school or university below.

GEORGE WASHINGTON UNIVERSITY Science & Engineering Apprenticeship program (summer) - Applications due: Feb. 27, 2009 - This program places academically talented H.S. students (at least 16 yrs old, sophomores/ juniors) with interest in science & math in Dept. of Defense laboratories for an 8-wk period over the summer. This is an invaluable experience in the world of… Continue