If you are reading this blog please cue up the song “Public Service Announcement” by S.Carter. This is a public service announcement Sponsored by Myself and the good folks at...I did a little thinking today. I serve the public. I provide a great service. In fact, I am proactive to keep the quality of my work high and try to solve problems quickly, fast, with no pain and complaints.  The general public is something else. These days, I hear all types of…

I watched Discovery's Surviving the Cut again the other day. The episode was about Special Forces Divers. This elite force invites strong elite military officers to start with, and puts them through brutal aquatic training.

The segment of the show that really stood out to me was the drown-proofing exercise. Created to test how the recruits dealt with terror, this intense test started out by binding each… Continue

The Reach of Rowing

From USRowing.org, by Ed Moran: The boat bay at the Genesee Waterways Center was already warm and muggy before it started to fill with USRowing and Rochester city representatives.

It hadn’t rained in Rochester in almost two months, but this morning the rain came down hard. The…

From Chron.com, by Lauren Mathis:

I used to burden myself with the notion that I must teach my children all things. I am, after all, homeschooling mother. The bigger the challenge, bring it on!

That was back when I was schooling two children and having babies and what not.

I found out that I can’t legally teach everything, (hello, driver’s ed!), and I physically can’t teacher other things, not the least of which is swimming!

LeBron: "You Got a Brother on the Team?" 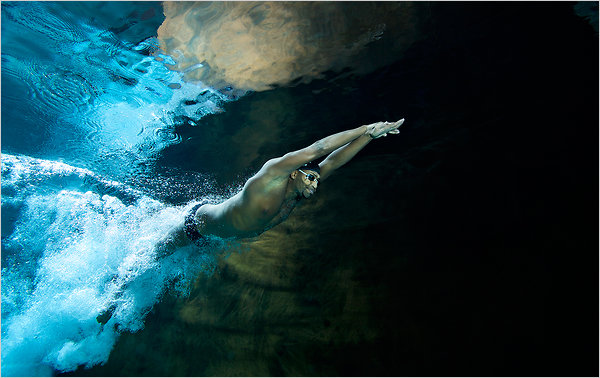 Cullen Jones recounts a funny 2008 Olympic story in a recent article in the NY Times.

Michael Phelps wakes Jones to tell him that LeBron James and other basketball stars want to meet them in the lobby of the hotel. Cullen goes downstairs and hears LeBron talking to Phelps about going for his 8th gold medal. But when he meets Cullen, LeBron exclaims, "Wait, you… Continue

I had an unusual challenge at the aforementioned family reunion. We had a formal banquet on Saturday evening. That in and of itself was not unusual; I'm sure many families do the same. But after traveling 15 hours to get there, living out of a suitcase, and taking two young children who EXPECTED to use the pool?

I worried just a touch about that formal evening.

Just in case, I had packed all my hair products and tools, so if I had to wash my hair, I… Continue

A Lifeguard is Never Off-Duty

My story about a friend's experience at the beach sent chills through my daughter, and she questioned whether she really wanted to be a lifeguard. But she went through the training anyway, and my daughter was a lifeguard for 2 years at the Y. Now she's moved onto a different phase in her life, involving glamor and beauty.

This weekend, we went to the family reunion together, and I thought I'd take the babies… Continue

Yesterday, I had the privilege to meet with International Swimming Hall of Famer and legend Mr. Fred Evans.  For those of you who don't know, Fred was the NAIA National Champion in Swimming thus being recognized as the First African American National Collegiate Champion.  He was also a three time NCAA Division II National Champion in the 100 yard Breaststroke and… Continue

I intended to blog after every practice. I intended to document my progress (or lack of). Not only in planning and executing a major national event, but to chronicle my own training. Good intentions have made way for God’s intentions. The amount of detail required to manage a diverse and demanding group of people have made it necessary for divine intervention every day. Imagine practicing twice a day three times a week and once the other two days, managing the group’s training and planning a…

Discovery Channel's show, Surviving the Cut makes you wonder what you thought you were doing in the pool. The show follows wannabe elite naval forces through intense training, including swimming in 45 degree water at night.

In a recent episode, we watched a black man, Guy Smith swim over a mile in 45 degree water with an injured leg. The group of SWCC candidates started out with 40 and ended up with 10 men over the course of 50 days of grueling basic training.

While in Detroit this past weekend I took some down time to check out the Motown Museum- Hitsville, USA!!    As  I was learning more about Mr. Gordy, how he inspired artists and built the Motown empire I couldn't help but see the correlation in mentoring, teaching, coaching and building a team.  I think this quote speaks to the idea of helping provide the tools for children to maximize their potential and reach for greatness in any endeavor.

“Every day I watched how a bare… Board Member Detroit Clinic @ Brennan Pools with University of Michigan

I spent this past weekend in Detroit at Brennan pools, a swimming relic consisting of 3 long course pools that served as the venue for the 1956 Olympic Trials. The historic venue played host to a creative swim clinic.  As an extension of the USA Swimming Detroit Project, The University of Michigan's Men's Swim Team volunteered in an interactive clinic with 52 swimmers from various Detroit area swim teams.  The athletes rotated between four stations of… Continue

On my last post, I mentioned the embarrassment that was the black chef on Extreme Chefs. I hadn’t seen the worst yet. When the show ran again hours later, I saw how the eager brother ran to the lake, beat the other two chefs to the punch, and dove in. He proceeded to go nowhere fast, but down. Blaming the seaweed and the fact that he was wearing clothes, the chef floundered in the same place for a minute, before lifeguards on the scene dove in to rescue…

Here's the latest information to share with rowers to see if they would like to participate in the inaugural US Rowing Diversity Invitational being held and hosted here in Rochester.

We are working hard with US Rowing to put this historic regatta on - it is potentially a really big deal in that US Rowing is backing this and talking about helping to grow it year on year on year and having it in Rochester each year.

Black Chef Opts out of Aquatic Challenge on Extreme Chefs

It does seem like a stretch for Food Network to combine Survivor and Chopped, but hey, why not? I was happy to give it a try.

When I tuned in, three chefs had to swim out to a spot in the cold body of water, catch a fish, (which had already been trapped for them), and then get in a boat and row back to a cooking station.

While the two non-black chefs gamely dove in and tried their hand at the aquatic challenge, the black chef chose to stay on shore and add 5 minutes to his…